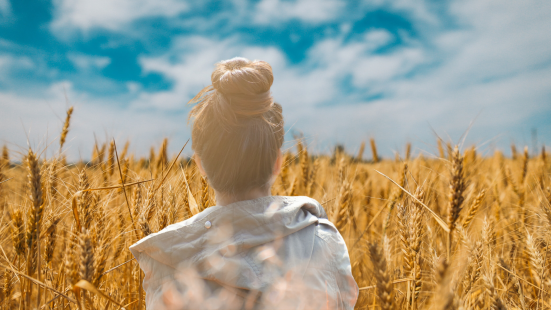 When this financial burden was taken off Tanya's shoulders, she cried out of gratitude. And her expression of thankfulness is something that will stay with me forever. So, on behalf of Tanya, I would like to say, with your contribution you did something amazing.

Read the story of Tanya, a young Ukrainian lady in Slovenia, and how God used ECM -and an ECMer- to help her in her time of need. Diana Ovcar, ECMer in Slovenia, tells us her story:

Shortly after the war in Ukraine started, a young Ukrainian lady named Tanya came to Ljubljana with her daughter Sasha who's less than one. Tanya has been walking with the Lord for about 20 years now and her trust in Jesus is an inspiration to many. She had to leave her husband behind in central Ukraine, where he was mobilised in the military but as he is a believer, he became a "chaplain" who's been a witness for Jesus among Ukrainian soldiers and through his witness many of them came to Christ.

Tanya and Sasha were staying with Tanya's sister-in-law who lives in Ljubljana, and she’s been very kind to them. As a strong believer (and worship leader) Tanya was looking for a church, so her first Sunday here, she walked into our church. She doesn't speak any English or Slovene, so she was not in an easy situation. But one of the many things I admire about her is that despite not understanding anything, for 2 months she was faithfully coming to the service and trying to engage with people. As she could not freely communicate with her new fellowship, she was in a hard place.

But another thing that really touched me about Tanya is her joy. We used Google Translate to talk to her and every time when someone asked her "How are you doing", she would say "zelo dobro" - "Very Good". I would always see her smiling, always joyful, she would never come up sad or hopeless, even though she would have every right to do so! She left her home, her husband and found herself in a place where she could not talk to anyone freely. Despite all that - she was always joyful, always doing good and that was a great inspiration for many of us.

As we started thinking about how we can help her to settle in - also with the help of ECM - she decided to go back to Ukraine. She's from the central part, at the moment their city is not under the bomb attacks and as she is terribly missing her husband, so they decided that Tanya and Sasha would come back. They left on May 23rd in the morning.

However, as they were going back to the war zone, we wanted to help them with getting some essential supplies - like food for Sasha, kids' care products, clothes … And this is where ECM stepped in very generously. ECM provided all those things for them but also paid for their shuttle tickets back to Ukraine.

When this financial burden was taken off Tanya's shoulders, she cried out of gratitude. And her expression of thankfulness is something that will stay with me forever. So, on behalf of Tanya, I would like to say, with your contribution you did something amazing - you provided the basic needs that will ease up a bit of their very heavy situation and Big Thank You for that!!

As Tanya and Sasha are back in Ukraine, please be praying for their family: